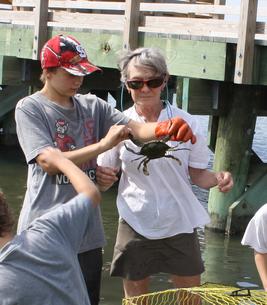 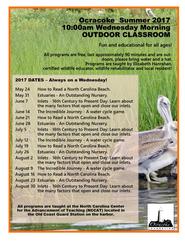 ​Summer 2017 was  the 7th season of the Outdoor Classroom Summer Programs for the public. All are welcome to attend.  There is no cost for the four different programs.

Each activity based program follows the North Carolina Essential Standards for Science.

For 6 years, these classes were initiated and taught by Elizabeth Hanrahan, who was a full-time Ocracoke resident, a retired Ocracoke Foundation (OFI) Board member, a certified environmental educator and a licensed wildlife rehabilitator through the NC Wildlife Resources Commission and U.S. Fish and Wildlife Service.   ​​In May 2018 Elizabeth passed away at age 73. Below is a brief description of her tireless efforts to rescue injured wildlife.

What is life like for a Wildlife Rehabilitator on the island?

Keeping pace with Elizabeth is tough. She is up at 3 AM every day and moves fast!  She teaches Wildlife Rehab throughout North Carolina as requested by the state Wildlife Resource office. Elizabeth also volunteers to teach the local school children and over the past seven summers devoted every Wednesday to teaching free Environmental Education Programs for vacationers.

The Rehabilitation takes place at her home on Ocracoke.  There are numerous large cages or pens which are completely enclosed. Each has different dimensions and are outfitted for specific uses.  For example, an injured owl requires different surroundings and "accessories" than a pelican.

- During the winter months, Elizabeth walks the sound side of the island starting at the north end and moving south towards the village.  Cold weather and storms sometimes will trap migrating birds or turtles, cold-stunned wash into the marsh.

- Occasionally a raptor is brought in, such as an owl or a hawk.

- Food: The local fishermen are wonderful for supplying fish scraps when needed.  For feeding raptors though brown and white mice are used. Elizabeth buys and freezes. Brown mice are preferred by raptors.

- After storms Elizabeth will typically get calls. Injured birds or babies washed from the nests.

- Birds get released in different places on the island. The shore birds are released on the beach. Elizabeth sits with them until they are ready and they can take-off on their own. Sometimes, in the case of a migrating bird, she will bring the bird every day to an area where she knows its species is, so it can watch.  Soon it will be released and join the others.

- Young shore birds sometimes need to learn how to swim, as was the case with about 30 pelicans after a summer storm in 2012.  The babies were washed away from Beacon Island.